You are here: Home › In the news › Zoleka Mandela: It’s never too late 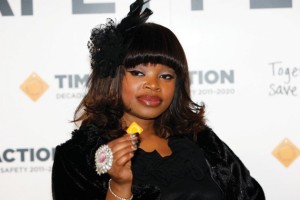 Zoleka Mandela has had a tough life but she has fought back and is about to release her autobiography. Picture: Akira Suemori Foundation

Last Sunday was a very special day for Zoleka Mandela.

It marked exactly three years of sobriety after a decade-long struggle with drug and alcohol addiction.

Today, Zindzi Mandela’s daughter, a granddaughter of Madiba and Winnie Madikizela-Mandela, has a message for women who feel down and out or those who feel trapped by their old, bad decisions: it’s never too late to change.

She is in the process of penning an autobiography that will echo these sentiments.

At just 33, she has had to overcome a great deal.

But her life is proof that even having an iconic name that is celebrated the world over does not shield one from life’s pitfalls and tragedies.

While the rest of the country was basking in the glory of the 2010 World Cup, Zoleka was burying her daughter Zenani, who was killed in a car accident after attending a tournament on the eve of the soccer spectacle.

But baby Zenawe was born premature and died a few days later. He was buried a year after his sister.

If that was not enough, breast cancer also waged its own war on Mandela’s body. She fought back and today is free of the disease.

Speaking to City Press during a road-safety awareness programme named after Zenani and held in KwaZulu-Natal earlier this month, Zoleka said her book’s main focus will be on breast cancer.

But it will also speak to “other very pivotal points in my life”, she says.

“I have a social responsibility. I know my pain is a source of inspiration. I was diagnosed with breast cancer and it is something I’m very passionate about.

“There are many, many women who have their daughters being diagnosed with cancer and many families who have lost their kids. I want to speak for that other woman who has breast cancer and keeps quiet about it. That is what I’m trying to do with my book, as well as to say, ‘Guys, it’s never too late to change.’”

Asked if the pain of losing a child eases with time, she said: “Obviously I get this a lot. ‘Zoleka how are you coping with this?’ And ‘Zoleka are you dealing with it?’ and I never know what the answer is.

“No, I can’t say that it does. But I do believe in celebrating my kids. I do that by being a good parent and becoming a good citizen. For me, there is no better way of celebrating my daughter than by contributing to road safety.”

Zoleka has one surviving child but “hopefully seven on the way”, she told City Press, laughing.

“You have to make that choice to want to improve yourself, so that you can be a better person for your kids, your family and to your society,” she said.

» Zoleka Mandela’s autobiography, Unbroken, is scheduled to be on shelves in early November. It is published by Jacana