You are here: Home › In the news › Growing Up Mandela: A Lineage That Carries Burdens All Its Own 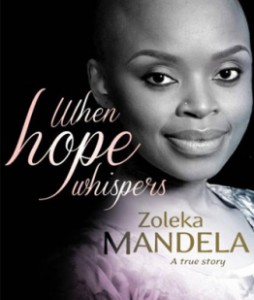 Growing Up Mandela: A Lineage That Carries Burdens All Its Own

*It is easy to assume that a persons’ motivation for writing a book is less than desirable. Especially if that person stems from a famous family.

Everyone is seeking at least 15-minutes of fame, right?

Perhaps. But as you read about the struggles and rearing of 33-year-old Zoleka Mandela, granddaughter of former South African president Nelson Mandela, those assumptions begin to melt away because, quite frankly, this girl’s got a lot of baggage of her own.

We already know the struggles her grandfather endured, spending decades in a prison cell (an inadequate one at that!) on Robben Island; But now we get a visual on how the apple really does not fall far from the tree. That survivor spirit comes shining through.

“By the time I was born, on 9 April 1980, my mother (Zindzi Mandela) knew how to strip and assemble an AK-47 in exactly thirty-eight seconds. She was twenty years old, trained in guerrilla warfare and already a full-fledged member of Umkhonto we Sizwe (the armed wing of the African National Congress),” says the opening line to “When Hope Whispers,” as it describes her mother’s participation in violent struggle against apartheid.

In the book, which recounts her family’s involvement in the fight against apartheid, Zoleka shares many stories. One of how she was smuggled into prison on Robben Island by grandmother Winnie Mandela before she was a year old so that her grandfather Nelson could see her. Another story told by her mother and grandmother of a time they said she helped her grandmother by hiding a hand grenade in her school bag, where police didn’t look, though she still saw her grandmother arrested. And still others, where she shares her struggles with alcohol and drug addiction, the loss of two of her children and her fight against breast cancer. In one poignant confession, Zoleka admits a pain she says she must live with forever regarding one child that was killed in a car accident.

“I hadn’t seen my daughter for 10 days before her passing, and I hadn’t because I chose to use drugs. That’s obviously a reminder that I chose my addiction over my kids and I have to live with that for the rest of my life,” she said with a heavy sigh, her large brown eyes cast downward.

“I’m sincerely hoping that it’s seen as a cautionary tale to a lot of other parents,” she said. “I got myself clean, but it doesn’t bring her back.”

A breast cancer survivor, Zoleka, who had a bilateral mastectomy and completed chemotherapy in early 2013, recounts the experience.

“For me, what hurt me the most was I was losing my breasts. And my breasts was my connection to my kids,” she said.

“My childhood wasn’t normal, my childhood wasn’t sheltered,” she said. “I’ve had these challenges in my life, these unbearable circumstances that have happened in my life and I’m using my own life experience to help somebody else that is struggling on their journey.”

Read more of her incredible story at TheGrio