You are here: Home › In the news › Twanji Kalula: When Hope Whispers 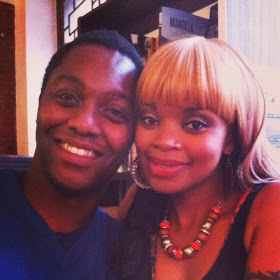 As the world contemplates what Nelson Mandela meant in the weeks after his burial, and into the new year, I am left thinking of what his legacy actually means to me – largely because of one of his grandchildren Zoleka Mandela.
After meeting her at her book launch in Cape Town in November, I was struck by her humility and warmth. Radio and TV personality Shado Twala interviewed Zoleka at the launch, and revealed that she expected to meet a brat, but was pleasantly surprised. I was too. There was laughter, there were tears and it was incredibly special.
I delved into her book a couple of weeks after our meeting – finishing it just 2 days before the world was informed that Nelson Mandela had passed away. The autobiography, titled ‘When Hope Whispers’, chronicles Zoleka’s struggles with sexual abuse, addiction, loss and breast cancer.
Zoleka’s writing is unbelievably honest and even self-deprecating at times. She doesn’t sugar coat a thing. She manages to shed light on what it’s like to grow up in South Africa’s most prominent family, explain what it’s like to battle addiction (to sex, alcohol and drugs), describe the seemingly insurmountable challenge of coming to terms with the tragic loss of two children and detail the effects of gruelling rounds of invasive surgery and chemotherapy.
The book is peppered with quotes from her grandfather, but he doesn’t appear in it very much. There are a couple of encounters with her grandfather that she recounts, which are brief, yet incredibly powerful. Through her anecdotes I was inspired by her grandfather’s ability to be there for her in his own way when she needed him, to provide concise, yet poignant, advice and show complete compassion. One gets a sense that through her struggles he maintained an unwavering faith in her ability to do something meaningful with her life.
One of the things I have struggled with is this notion that we should all be Madibas; that we should all follow in his footsteps. This has seemed impractical and impossible to me. I cannot begin to imagine what that kind of pressure is like for his children and grandchildren. We don’t face the same challenges and are no longer bound by a common cause today. The concept is too broad for me to make practical sense of it when I think about it. 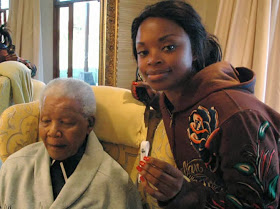 Through Zoleka’s anecdotes, and hearing people like Debora Patta, Joyce Banda and Limpho Hani recount the little moments that showcased what makes Madiba iconic man, I have been able to start putting together a blueprint of what his legacy means to me, and how I can do things differently to build on the grounding we have inherited. It’s the little things that count. It’s about thinking of others, committing to doing what is right and just – as often as possible. It’s about recognising humanity at all times, and never looking past people. It’s about believing in second chances, for yourself and others.
Though some of her other relatives have found themselves in the public eye more frequently and are subjected to the pressure of following in Madiba’s footsteps more heavily, Zoleka has assumed a quieter role in the family. But in my opinion, in her own way, she is marching in her grandfather’s footsteps. She has faltered, she has erred, but she is using her experiences to transform the world and make it better.
Throughout the book she also introduces us to a softer, incredibly loving and funny Winnie Mandela. I liked that.
The one criticism I have is her inability to truly forgive herself, and accept that she did the best that she could for herself and her children at the time. My hope for her is that she will find the space and peace in her life to do this in the future – and realise that she really is in a position to change the world. Though she feels as though she disappointed her family and let her children down, she is doing the opposite in my view. She works tirelessly to keep the memory of her children alive and raises awareness around road safety (she was in Paris, reporting on her road safety work at the time of her grandfather’s death). She also wants to use her profile to empower women diagnosed with breast cancer – something that is needed so desperately.
I was left profoundly inspired by her story, and reminded that hope always whispers – even in the direst circumstances. Zoleka, thanks for sharing your story and, in your own way, creating your own path alongside your grandfather’s enormous footsteps.