You are here: Home › In the news › Zoleka Mandela inspirational journey of loss, hope and faith 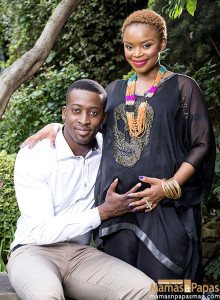 When you ask Zoleka Mandela how she’s enjoyed her 32 weeks of pregnancy so far her beaming smile – if bottled – could surely generate enough light to power a small household for the night. She will lean in nearer and tell you in hushed tones of excitement how blessed she feels and what a miracle the baby inside her is. To truly appreciate Zoleka’s infectious joy and boundless hope, you need to understand that her journey has been tough to say the least. She wants you to know that when she reached her lowest point, fractured by years of running from bad choices, she clawed her life back in the midst of the most inconceivable loss. “I want to be an example of what is possible, I want to show people that no matter how far down the road you think you are there is always hope.”

RAISED A MANDELA
Despite the fact that her parents were in a relationship for ten years, they parted ways when Zoleka was only a toddler and she has no memory of a time when they were a couple. She is the only child of her biological parents and has one half-brother and five half-sisters from her parents’ subsequent marriages respectively. “Because my parents never married, and my father never paid inhlawulo or ‘damages’ for making my mother pregnant – which is our African tradition – I was named and raised as a Mandela.” Zoleka’s earliest memories are of living with her aunt Zenani – the eldest daughter of Nelson and Winnie Mandela – and her cousins in Swaziland. She recalls her earliest memory of her fourth birthday and remembers missing her mother that day.
Zoleka’s mother Zindzi is the second-born and chose to send her daughter to her sister in Swaziland while she studied at the University of Cape Town. “My mother was also more politically active and that period must have been a far too dangerous one for me to be living at home in Soweto,” Zoleka explains. Eventually the young girl would be reunited with her mother and grandmother in Soweto when Zenani left Swaziland for the USA. “I was five at the time,” she continues, “and would have been quite relieved and happy to befinally reunited with my mother and grandmother.”

Read more about Zoleka’s journey in our April 2014 issue.